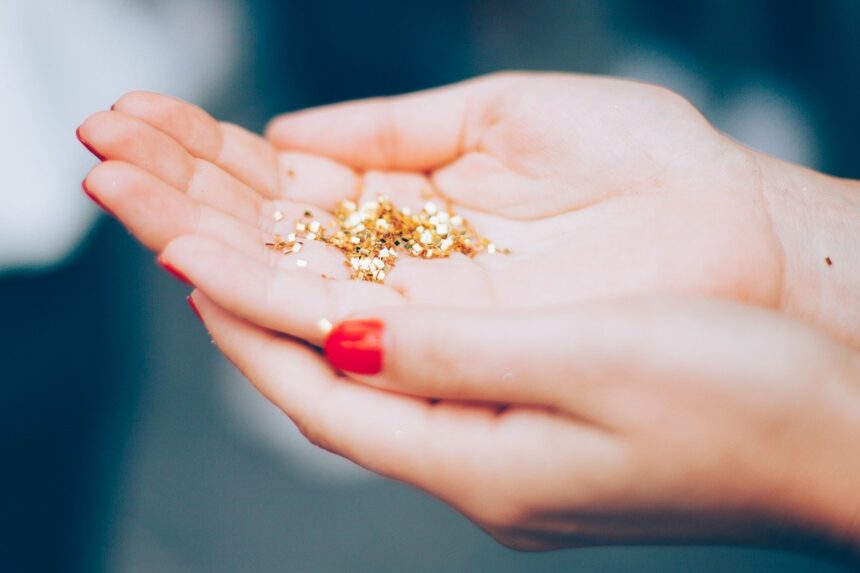 All needlewomen are familiar with these iridescent pebbles. Now you can easily buy glitter in bulk, order them on any site, find them any store, but some time ago they were equated with precious stones.

Hematite powder and other crushed sparkling minerals with which people decorated cave painting can be considered the ancestors of the spangles. Such decor was discovered in the Paleolithic caves. In ancient Egypt, powder obtained from the wings of beetles was used for skin shine. In BC India, gemstone powder was used. Later, many civilizations used frayed mica, glass, and fish scales.

The glitter that we know today was invented by mistake. In 1934, locksmith and herder Henry Rushman came across a way of cutting colored plastic into tiny sparkling fragments. He did not immediately understand what he had invented, but decided to patent it. So he founded the Meadowbrook Inventions factory, which exists today, as the world leader in the production of sequins. This is where the story of creation ends and no less interesting chronology of popularization begins.

In the 1960s, the largest corporations of those years – Revlon, Estée Lauder, Elizabeth Arden, and Helena Rubinstein – began to produce products with a small shimmer. It was blush, eye shadow, powder and lipstick.

In 1972, personal makeup artist David Bowie Pierre Laroche creates the image of Ziggy Stardust, a glam rock hero with an unforgettable sparkling make-up, for the singer. This image immediately becomes a cult and serves as an aesthetic reference point for lovers of parties and night clubs.

In the 1990s, glitter ball gels with a ball applicator that Britney Spears popularized appeared. She used them before concerts, applying to her collarbone, décolleté and stomach.

The distribution of sparkles on the catwalk came from the couture show of Christian Dior in July 2007. Then Pat McGrath bleached the eyebrows of the models and applied sparkles to them with wide strokes. Since then, it has been difficult to imagine Fashion Week without sparkles.

In addition to makeup and clothing, you can use glitter for crafts. Glitters vary in color, grinding, and release form. The last item is most important when choosing a material – depending on your goals and the area of ​​application of glitter, pay attention to the choice of packaging, so it will definitely be convenient for you to work:

Dry. In fact, these are sparkles. Just sprinkling paper with dry glitter is not enough – you need to fix the sparkles on the sticky substance. In order to decorate your work with dry glitter, apply glue or double-sided tape to the desired place, and then sprinkle it with sparkles. After the glue dries or immediately, in the case of double-sided tape, brush off the rest and voila – beautiful coating is ready.

Glue. Glitter glue is a material in which the adhesive is already mixed with sparkles. This type of glitter greatly simplifies the work in the case when you need to decorate the contours of parts or create a pattern of sparkles.

Image by Pexels from Pixabay

A good way to buy bitcoins


Who is a SEO Specialist